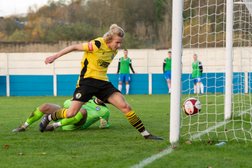 Widnes conceded a trio of first half headed goals as they went down 3-2 at Ramsbottom United on Saturday.

The Rams raced into a two-goal lead after just 13 minutes through Jamie Rother and Hugo Rodriguez, but the Whites soon replied when debutant Greg McCaragher halved the deficit.

John Murphy restored the hosts’ two-goal advantage on the stroke of half-time and while Ryan Jennings set up a tense finish, Ramsbottom held on for all three points.

Dave Dempsey made four changes to the side beaten by Colne last time out. New signings McCaragher and Luke Wall made their first starts while Jack Hatton and Sam Adetiloye both earned recalls.

Widnes initially made a positive start, but they fell behind after just seven minutes when Rother arrived late at the back-post to nod home from Jake Thompson’s cross.

And it was 2-0 shortly afterwards when the imposing Rodriguez was afforded too much room to rise highest to head beyond Owen Wheeler after Widnes failed to stop a cross from the left.

Dempsey’s team eventually settled down and found some rhythm. Wall was particularly influential and was proving difficult to handle, while James Steele once again ran his socks off for the cause from an advanced position.

It was Wall who turned the screw as Widnes halved their deficit. He drove at Owen Collinge and engineered space for a cross that was brilliantly brought down by McCaragher who applied a finish after getting the better of Rams keeper Tom Stewart.

It had taken just 19 minutes for McCaragher to net his first goal for the club after arriving from Kendal Town in midweek.

In truth, Widnes were mightily unfortunate not to equalise just three minutes later.

Steele released Wall who terrifically turned away from the challenge of George Wyatt only to be denied by a strong glove from Stewart, who was excellent between the sticks for the hosts.

McCaragher would then shoot over for Widnes, while striker Callum Hassan would force another save out of Stewart with 10 minutes remaining in the half.

Dempsey’s side would ultimately rue their missed chances, particularly Adetiloye’s back-post free header that fell harmlessly wide of Stewart’s goal when it was easier to score just moments before falling 3-1 behind.

The Widnes boss admitted after the game that he was embarrassed by the manner of the goals conceded in the first half, as Murphy scored with an unmarked header just two minutes before the break after the visitors once again failed to stop a cross into the area.

Once the half time whistle was blown, Dempsey and his coaching staff remained on the pitch for a discussion while his team trudged into the changing room, but whatever was said at half-time seemingly lifted Widnes, who started the second half well.

Stewart could only parry a Steele header which presented an opportunity for Hassan but he couldn’t quite muster a rebound and a brief scramble allowed the Ramsbottom goalkeeper to recover and collect the loose ball.

Moments later, Wall led the charge on the counter-attack for Widnes and released Ste Rigby in behind but again, Stewart was out quickly to make a good save with his feet.

But the Whites did have goalkeeper Wheeler to thank for keeping his side in the game 10 minutes after the restart, pulling a fine double stop to deny efforts from Thompson and Rodriguez.

A fair degree of niggle developed following the hour-mark which hurt proceedings, with referee Daniel Mitchell perhaps a little bit too eager to show yellow cards as the game felt very stop/start.

It was changes from the bench that aided Widnes and ultimately proved dividends. Jennings and Alex McMillan were introduced from the bench by manager Dempsey with Steele pushed into a false nine role once Hassan departed.

And it was Jennings who halved the deficit with a well-taken goal 15 minutes from time after good work by Steele in the build-up.

Widnes went for it, switching to a 3-4-3 formation for the late stages of a game that had grown into an entertaining contest.

But the excellent Murphy almost killed off any hopes of a Whites come back after 81 minutes, but Wheeler produced a superb save to deny the Man of the Match a second goal.

The visitors’ best chance of the closing moments fell to skipper Mike Burke from a corner, but he could only prod straight at Stewart as Widnes fell to a fourth straight league defeat.