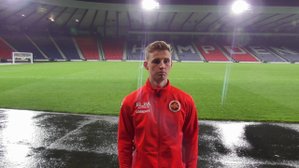 Widnes Football Club is delighted to confirm the signing of winger Ryan Watters.

The 23-year-old joins having been released in the summer by Scottish Football League Two side Stenhousemuir, and made his debut in Saturday's 2-0 defeat at Runcorn Linnets.

Ryan came off the bench on the hour-mark and impressed in his first taste of English football following his move south of the border.

A former Scottish youth international, Watters began his career at Motherwell before moving to Albion Rovers in 2017 via a brief stint at St Mirren.

Ryan joined Stenhousemuir in January 2019, spending the last two-and-a-half years at Ochilview Park prior to his departure earlier in the summer.

Joint-manager Kev Towey said: "Ryan will play a big part for us over the coming weeks.

"We were tinkering with the idea of playing him straight from the start on Saturday but ultimately decided it against us.

"Obviously circumstances meant that he couldn't make too much of an impact on the game but his quality was clear for everyone to see and he'll be an important addition for us."